Malavoglia and Testa: cousins of the sea

Giovanni Verga spoke of the fishing Malavoglia family of Aci Trezza in his 1881 realist novel. Ognina’s Testa family started fishing even before the Malavoglias, and has continued to do so for over two centuries. The Testas are real life cousins of the Malavoglias, and of all the fishermen along the Etna coast.
The Testa story begins at Ognina, at the ancient port of Ulysses that used to welcome up to 250 ships. A tremendous eruption in the 300s buried the port and in its place the Porticciolo di Ognina (Ognina Marina) was built; since then Testa boats have always been docked at this marina.
It started with a boat for fishing along the coast, with traps and little nets, manned by Zu Puddu Ntreppiti (Pippo the performer), who acquired this nickname for his distinctive style and habit of wearing a hat everywhere.

Till today, there is a Via Testa at Ognina, testament to the deep roots of the family and in memory of the past generations. All male Testa descendants continue to be protagonists of this history, carrying one of four names that run through the Testa bloodline – Salvatore, Giuseppe, Concetto and Antonino.  However, in the long history of the family, there is room for one Agata, a heroine who helmed the family when she was widowed.

For a long time, fishing was done with sailing and rowing boats. The first motor boat traces back to 1950. It was baptized Buttafocu (fire thrower in Sicilian). Others followed – Ulisse, Santopadre and Gabbiano. The latter represented a step up for fishing. Next came Nino Testa, the 30m wooden motor vessel. That was in the 70s, when tuna fishing commenced.
With each new boat came new ambitions, objectives and skills. In 2002, 42m Atlante and 38m Futura Prima were launched, both made of steel. The former was mainly used for fishing red tuna, while the latter supported the Atlante and concentrated on oily fish. Both were also often involved in marine studies and projects.

If an image were to depict the present and the past of the Testa fishermen, it would be a man helming the boat with a lamp hovering above a school of oily fish. He still works with the ethics of the past, only that today instead of shouting out orders, he communicates via a earpiece.
The turning point for the fishing sector and the Testas’ future came in 2009, when ICCAT quotas for red tuna were stipulated. It was a wise decision that, together with a one-year fishing ban in 2010 and Italy’s policy on conservation and control, saved the red tuna from extinction. The repopulation of tuna simultaneously represents an unexpected journey back to the past and, more importantly, hope for the future. 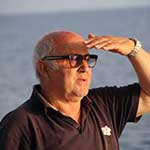 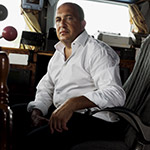 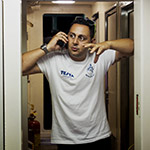 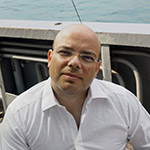