The port of Ulysses and A’bammina

The port of Ulysses

The marina of Ognina, protected by the Virgin Mary, was where Ulysses himself docked and commenced his long adventures in Sicily. First in the cavern of Polyphemus, then at the court of Eolo. Following the clash with Circe, there was the descent to Hades, the Sirens, the journey between Scylla and Charybdis and the new landing in the Island of the Sun, where his hungry companions ignored the prohibition and tasted the meat of Apollo’s herds of Apollo, bringing about their
own end. 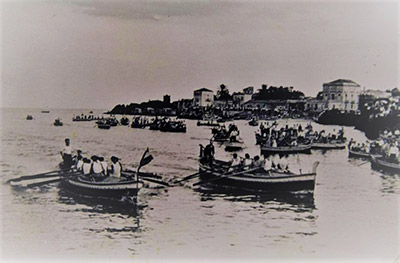 “We came to the land of the Cyclops race…yet with no sowing and no ploughing, the crops all grow for them–wheat and barley and grapes that yield wine from ample clusters, swelled by the showers of Zeus.” Many have identified Ulysses’ landing along this coast, the destination of many routes from the East.
One of the main testimonials is that of Plinio il Vecchio. The writer, naturalist
and Roman Admiral writes: «From Capo Peroro, along the coast overlooking the Ionian Sea, after the city of Messina…the colony of Tauromenio…in succession the three rocks of the Cyclops, the port of Ulysses, the colony of Catania, the rivers Simeto and Terias “.
Imagine a large inlet between Gaito and Rotolo, two locations that today constitute dry land. The harbor was largely filled by two large lava flows, the second one in 1381, which reduced the port of Ulysses to an eyelet and stopped the course of the river that flowed nearby. Until then, the port of Ulysses had been the port of Catania. There is an aerial photo from the 40s that depicts how the hamlet of Ognina tightened around the slipway and how the steps from the church
led directly to the sea.

Perhaps to understand what it means to be fishermen at Ognina, it would be necessary to witness how loved ones bless the fishermen when they cast off. Men and their tools under the indiscriminate protection of the sky. 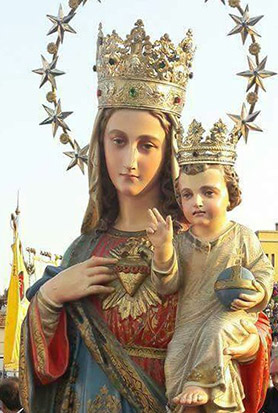 And here, the sky has the charitable, sweet and understanding gaze of the Virgin Mary of Ognina. A look which encompasses mother, sister, wife – a look that strikes anyone in that fleeting moment before and after the royal gaze of the Holy Child seated on her left arm as if on a throne. The Virgin Mary’s hand brushes against her chest, her flaming heart echoing Jesus’ blessings. Her face and her eyes speak of a certain abandon, a silent trust, a humble certainty – deserving of a more affectionate name. She is the Mother of God, our Advocate. At Ognina, she is fondly known as “a’Bammina”. At the celebration of her birth at 8am on the 8th of September, a solemn unveiling ceremony takes places. The crowned and illuminated statue appears on the main altar, slowing rising towards the tabernacle. The following Saturday, the Virgin Mary of Ognina is carried by a procession onto a boat, reaffirming her desire to unite the world and the sea. Even today, despite the fact that the road blocks the view of the shore and the horizon, every evening at a quarter past 8, under the clock, at the top of the facade, the door shutters open up and the Virgin Mary appears, looking out at the Ionian.