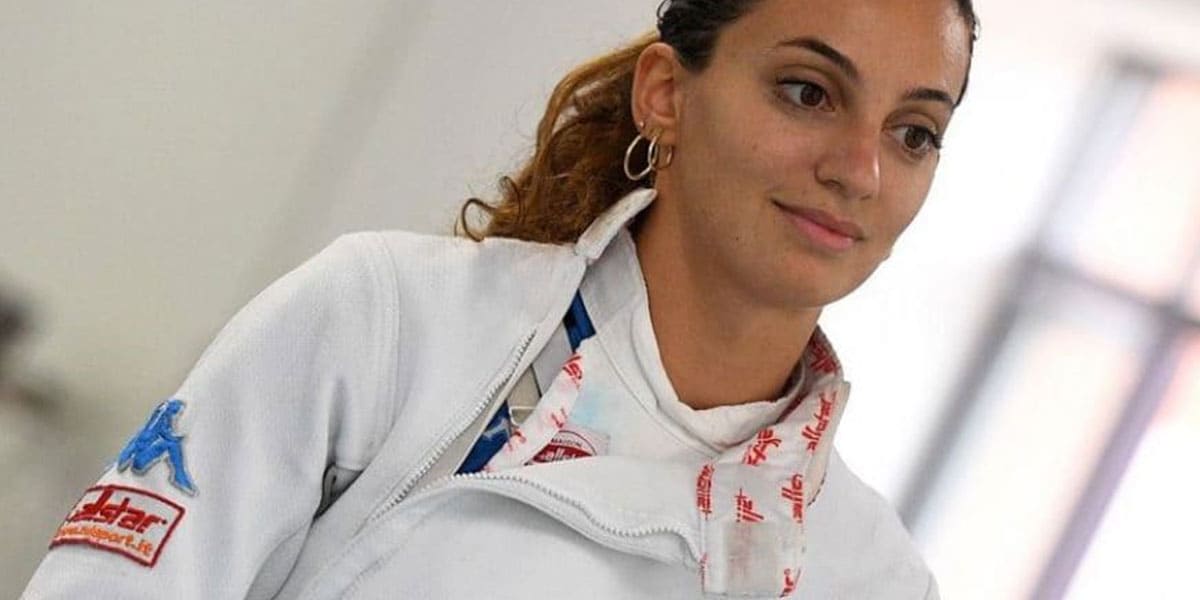 Tell us your story as a fencer, your first competition, your first success and what it means to train: times, exercises…

My first competition was at provincial level, a mixed competition that I won, giving the boys a run for their money. I was eight years old and there were two competitions: one in fencing and the other in agility, where I had an advantage because I really liked rhythmic gymnastics and ballet, which I didn’t continue because my father convinced me to follow in my brother’s footsteps with fencing. And so it was, first with the Forestry Sports Group and then with the Carabinieri. After all, even crossing your sword on the piste is a way of dancing. You have to memorise and coordinate the movements and, above all, be careful about timing. Ten years of piano lessons, crowned by a diploma from the Conservatory of Catania, helped me a lot in this aspect.

What characteristics must a fencer have compared to other fencing disciplines?
The main difficulty is to achieve continuity in performance. This is something that happened to me when I won my first women’s Olympic medal in Rio and then the team bronze in Tokyo. In epee you need a lot of concentration. First of all, it is a heavier weapon and before facing the opponent you have to have clear ideas, because you can hit and be hit, even if only on the point, in all parts of the body, even a double blow or on the hand. Not to mention the fact that it is difficult to emerge in epee, because there are more athletes and more nations that practice it.

The sea, what is the first image that comes to your mind?
My sea, in Acireale, where I live and train. When I was in Tokyo, I used to show my videos in a canoe to make me feel less of a recluse and almost at home.

As well as being an epee competitor, you are also a pianist and, above all, a dietician. Can you tell us, in brief, what is an athlete’s diet based on?
On a balanced diet, which is indispensable for tackling the long training exercises and competitions that can last an entire day. Only healthy ingredients, preferably organic, and as few artificial ingredients as possible. The problem is not losing weight, but having enough energy to maintain lucidity and physical performance.

The quality of the raw material and the ability to process it, as well as the sustainability of the fishing, make Testa Conserve bluefin tuna, along with oily fish, a good and safe product. Nutrition is part of physical preparation. In what percentage?
If we were to draw a diagram, a fencer’s performance depends 70 per cent on concentration and 30 per cent on a trained physique. Two factors, however, which in turn depend on a proper diet. I recommend the Mediterranean diet to athletes, which favours cereals, fruit, vegetables, seeds and olive oil. Compared to a rarer use of red meat and animal fats (saturated fats) it has a moderate consumption of fish, white meat (poultry), legumes, eggs, dairy products, red wine, sweets. I met the Testa family, visited their factory and was impressed both by the ‘natural’ way they treat their products and the fact that they are directly involved, like a family and not an industry.

Do you have any personal memories of fishing, any kind of fishing?
This is the first time I’ve been asked this question and, here too, I have to start with my father who taught me the secrets of shore fishing with a rod. When I was a child, it became such a passion that I would wake up at five o’clock to catch the best fish.

Can you tell us what distinguishes the Sicilian fencing school and what, if any, examples have inspired you in your career?
Yes, there is a Sicilian school and tradition that goes back to Paolo Pizzo and has been perpetuated with athletes such as Marco Fichera, Daniele and Enrico Garozzo, Alberta Santuccio, Giorgio Avola, and Loreta Bulotta. People who started like me, from regional competitions to the Olympic stage. Athletes from all over Sicily who, compared to others, have an extra charge. A determination that comes from the sacrifice of always having to move around to compete and not disappointing the efforts of their parents. My role models, those who watch carefully even in the way they move, whose example has been and remains Valentina Vezzali, Giovanna Trillini and Aldo Montano without forgetting the daily presence of my teacher Gianni Sperlinga.
Photo Fiamingo: Augusto Bizzi
Testa family, fishermen in Sicily since 1800